I Almost Forgot About You: A Novel (Paperback) (Used) (Word Up) 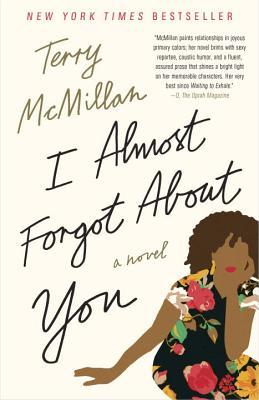 In I Almost Forgot About You, Dr. Georgia Young's wonderful life—great friends, family, and successful career—aren't enough to keep her from feeling stuck and restless. When she decides to make some major changes in her life, including quitting her job as an optometrist and moving house, she finds herself on a wild journey that may or may not include a second chance at love. Georgia’s bravery reminds us that it’s never too late to become the person you want to be, and that taking chances, with your life and your heart, are always worthwhile.

Big-hearted, genuine, and universal, I Almost Forgot About You shows what can happen when you face your fears, take a chance, and open yourself up to life, love, and the possibility of a new direction. It’s everything you’ve always loved about Terry McMillan.

Praise for I Almost Forgot About You

“McMillan paints relationships in joyous primary colors; her novel brims with sexy repartee, caustic humor, and a fluent, assured prose that shines a bright light on her memorable characters. Her very best since Waiting to Exhale.”—O: The Oprah Magazine

“The novel is immensely companionable, and Georgia is as alive, complex, inquiring, motivated and sexy as any twenty-five-year-old. Maybe more so.”—The New York Times Book Review

“Self-discovery, second chances and the importance of family are thematic hallmarks of McMillan’s novels. . . . I Almost Forgot About You checks all the boxes.”—Washington Post

“McMillan is funny and frank about men, women and sex. Her summaries of Georgia’s marriages and major love connections . . . are powerful and poetic.”—USA Today

“Reading a Terry McMillan book feels like catching up with an old friend. . . . I Almost Forgot About You is a book that is important for readers of every age.”—Ebony