March to the Monteria (Jungle Novels) (Paperback) (Used) (Word Up) 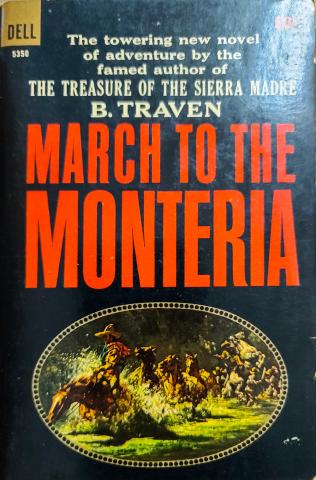 Author:
B. Traven
About The Author:
The mysterious B. Traven (1890-1969) was born in Chicago, spent his youth in Germany as an itinerant actor and revolutionary journalist, became a seaman on tramp steamers, settled in Mexico in the early 1920s, and began recording his experience in novels and stories. In the United States his best-known novel is The Treasure of the Sierra Madre.
$5.00
Description:

March to the Monter a is the third of B. Traven's six Jungle Novels, set in the great mahogany plantations (monter as) of Mexico in the years before the revolution. Here Traven relates the life of Celso, a young Indian whose only goal is to earn enough pesos to purchase a bride. He works two years on a coffee finca, but when he returns home he must hand over his money to ladinos who claim his father has a debt to them. Celso then goes off to work two years in a monter a--but he is such a good worker that he is thrown in jail on a trumped-up charge to assure that he will stay. When he is bailed out by the labor agent, he heads off for a term of debt-slavery in the monter a, from which, it is clear, he will never return. Having already forfeited his life, Celso has nothing to lose and takes his vengeance on agents and overseers. As in the other Jungle Novels, Traven traces the beginnings of consciousness which ultimately led to the Mexican Revolution and the overthrow of the D az regime.