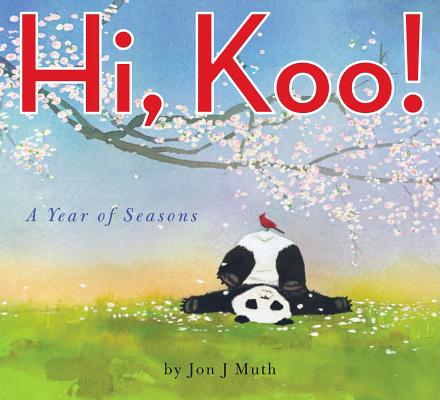 Eating warm cookies
on a cold day
is easy

With a featherlight touch and disarming charm, Jon J Muth--and his delightful little panda bear, Koo--challenge readers to stretch their minds and imaginations with twenty-six haikus about the four seasons.

Jon J Muth is beloved all over the world for his seven books featuring Stillwater the Panda, whose love and balanced approach to life always serve to make the world a better place for his young friends. Muth’s many enchanting picture books include his Caldecott Honor Book Zen Shorts, Addy’s Cup of Sugar, Stone Soup, and The Three Questions, which the New York Times Book Review called "quietly life-changing." His books have been translated into more than 15 languages and are cherished by readers of all ages. Muth draws inspiration from his life-long interest in Asian Studies, including tai chi chuan, sumi ink drawing and chado, "the way of tea."

Muth is also renowned in the world of graphic novels. He won an Eisner Award for his paintings in the graphic novel, The Mystery Play by Grant Morrison. He’s partnered with Neil Gaiman on The Sandman: The Wake, Walter and Louise Simonson, and Kent Williams on Havoc & Wolverine: Meltdown, J. M. DeMatteis on Moonshadow and Silver Surfer, and with Stanislaw Lem on The Seventh Voyage which was nominated for an Eisner Award for Best Adaptation in Another Medium. He lives in New York State with his wife and their four children.

* "Every word and image comes to make as perfect a picture book as can be." -- KIRKUS REVIEWS, starred review
* "Like The Three Questions (2002), Muth's latest is both an accessible, strikingly illustrated story and a thought-provoking meditation." -- BOOKLIST, starred review

* "Stillwater . . . continues to combine his slow-moving grace with genuine spiritual tranquility. Muth's brush is as sure as ever. . . . From a religious tradition that makes no theological demands and that will be unfamiliar to most readers, Stillwater offers a model of pure saintliness, and children will instantly respond to him." -- PUBLISHERS WEEKLY, starred review

Kirkus Starred Review
Long before photography, poets took to haiku, the poetic equivalent of a snapshot, and painters to the suggestive medium of watercolor to capture the essence of moments in nature.

Caldecott Honoree Muth (Zen Shorts, 2005) employs both, with the help of his playful panda Koo, to present 26 moments through the seasons. Though light in tone and geared toward pre-reader eyes and interests, the mostly outdoor scenes Muth depicts command serious attention from all. The first page simultaneously demonstrates both Muth’s adherence to haiku’s three-line form rather than its traditional five-seven-five syllabic sequence and his exquisite use of white space. “Autumn, / are you dreaming / of new clothes?” reads the text as Koo reaches up to try to catch a handful of falling leaves. One of the few scenes referencing indoor living hilariously comes in early spring: “too much TV this winter / my eyes are square / let’s go Out and play.” Two children and Koo stand in front of a large television, the whites of the children’s eyes boxed and zombielike and Koo’s, two solid black squares. A more reflective, deeply moving spring moment finds the children alone with a book in the woods, Muth’s delicate watercolor and subtle inking deftly suggesting the forest’s shifting scope.