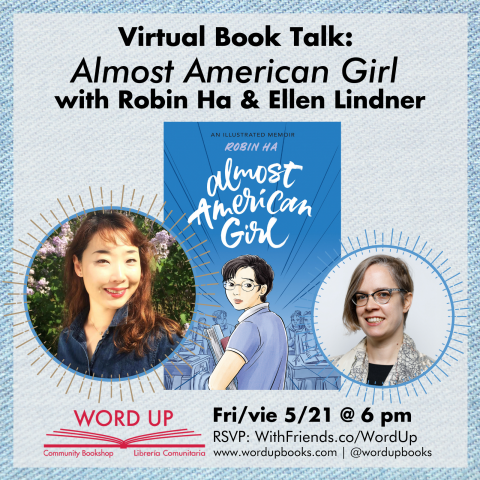 Almost American Girl touches Robin's experience growing up as the only child of a single mother in Seoul, Korea, which wasn’t always easy. A vacation to visit friends in Huntsville, Alabama, unexpectedly becomes a permanent relocation—following her mother’s announcement that she’s getting married—Robin was devastated. Overnight her life changed; Almost American Girl chronicles that change.

This will be a great discussion for all ages. Fans of great graphic nonfiction works like American Born Chinese and Hey, Kiddo will enjoy this book and this discussion.

Robin Ha (She/her) is a Korean American cartoonist based in Washington DC. She is the author and the illustrator of Almost American Girl, a 2021 Walter Award honoree memoir, and Cook Korean!: A Comic Book With Recipes, a New York Times bestselling cookbook graphic novel. Robin grew up in Seoul, South Korea, and moved to the United States at age fourteen. After graduating from the Rhode Island School of Design, she moved to New York City and worked in the fashion industry for several years before diving into comics. Her work has been published in independent comics anthologies as well as in the pages of Marvel Comics and Heavy Metal Magazine. Robin has been an avid reader of comics since she was introduced to them by her mother as a young girl. She strives to make comics that are entertaining and also empowering the readers to become more accepting of themselves and others. Robin is currently working on her third graphic novel inspired by the Korean folklore of Gumiho.

Ellen Lindner is the author of the Ignatz Award–nominated graphic novel "The Black Feather Falls," as well as "The Cranklet’s Chronicle," a history of women, baseball, and social change in America. Her comics have appeared in "The Lily," "Spiralbound," "World War 3 Illustrated," and a variety of other publications and anthologies. Ellen is also an editor and educator, and her activist art has been acquired by the Smithsonian Institution. She lives in upper Manhattan and is a collective member at Word Up Community Bookshop. Visit her online at LittleWhiteBird.com.

This event is part of the Lo'Mas Lit author talks. Lo'Mas Lit Book Club is a reading group, a book club, a discussion zone, quarantine-era hangout time for youth ages 13–20. Started in Summer 2020, this book club has brought together teens from across the Uptown Manhattan neighborhood and across the country.

Cook Korean!: A Comic Book with Recipes [A Cookbook] (Paperback)

WORD UP IS OPEN!