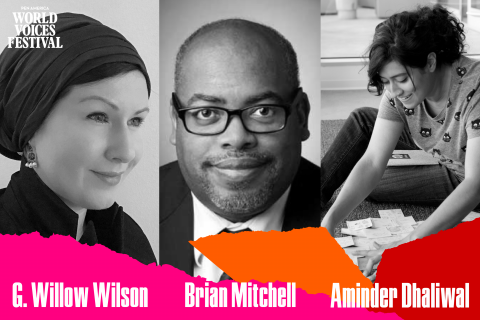 FLASH SALE: Through May 2, enter the code FLASH21WVF at checkout to receive 25 percent off. PEN America Members get a full 50 percent off.
Learn how to become a Member »

This event is part of the 2021 PEN World Voices Festival of International Literature. Visit pen.org/festival to learn more and get tickets for other events.

The graphic novel can be a work of protest art, with no-holds-barred storytelling that exposes injustices and offers vivid visions of a better world. With protagonists as varied as a teen superheroes, immigrant cyclops, or historic champions of civil rights, G. Willow Wilson, Aminder Dhaliwal, and Brian Mitchell, in their latest works in the genre, boldly enter some of today’s most pressing conversations, with their depictions of characters’ struggles against marginality and the actions many of them take for social justice.

Brian Mitchell’s Oscar Dunn and His Radical Fight in Reconstruction Louisiana shares the largely untold story of America’s first Black lieutenant governor, who fought for radical change during the Reconstruction era. G. Willow Wilson is the American Muslim visionary behind Ms. Marvel’s beloved heroine, Kamala Khan, who juggles daily between being a regular Pakistani-Muslim teen from New Jersey and a superhero fighting evil. The hand behind the hit Instagram comic series, Woman World, Canadian cartoonist Aminder Dhaliwal, rounds out the panel with her playful and incisive meditation on immigrant identity and race in Cyclopedia Exotica.

This digital event will start at 7pm ET / 4pm PT. If you have any questions, please visit our FAQs.

Presented in collaboration with Word Up Community Bookshop and the PEN America Children’s and Young Adult Books Committee.

Aminder Dhaliwal grew up in Brampton, Ontario and received a Bachelor of Animation from Sheridan College. She has worked as director at Disney Television Animation, storyboard director at Cartoon Network, and storyboard director on Nickelodeon’s Sanjay and Craig. Her first book, Woman World, was serialized on Instagram where she has over 250,000 followers, appeared on 25 best of the year lists, and was named a Young Adult Library Services Association (YALSA) Great Graphic Novel for Teens. It has been optioned for television by Felicia Day. Her second book, Cyclopedia Exotica, comes out in May 2021. Dhaliwal lives in Los Angeles.

Brian Keith Mitchell is a native of New Orleans and a resident of North Little Rock, AR. He identifies himself as a “transplanted New Orleanian,” who is forever thankful to the State of Arkansas for welcoming him during the chaotic aftermath of the hurricane. He is currently an assistant professor of History at the University of Arkansas at Little Rock and an associate faculty member at the Anderson Institute on Race and Ethnicity.

G. Willow Wilson is the co-creator of the Hugo and American Book Award-winning comic book series Ms. Marvel (2013-2018) and has written for some of the world’s best-known superhero comic book series, including X-Men, Superman, and Wonder Woman. Her first novel, Alif the Unseen, won the 2013 World Fantasy Award for best novel and was a finalist for The Center for Fiction First Novel Prize. Her second novel, The Bird King, was longlisted for the PEN/Faulkner Award for Fiction. In 2015, she won the Graphic Literature Innovator Prize at the PEN America Literary Awards. Her work has been translated into over a dozen languages. She lives in Seattle.

WORD UP IS OPEN!